May 01, 2009
It's the last month of summer but unlike the past years, we have not gone anywhere. No beach, no vacations, not even a family outing. Joey, my youngest, has to attend summer classes for Math. He had to make up for missing the final exam before school ended last month. His school does not give make up tests and grades will be based on the child's class standings. Sadly, his grade in Math was not high enough to cover up for the missed test.

During the first day of his exa 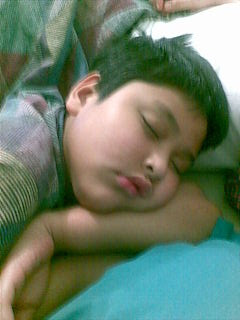 ms, he insisted he didn't feel well, but since he had no fever and it was an important school day, I figured he'll be alright. So I dragged him to school, and made a run for it. When he got home, Joey had a fever. He was complaining about his headache and achy muscles. It was the Flu!

The next day, he still had a fever. A small one. Could I pump him full of Tempra and vitamins and send him off? I considered it, but later decided not to which was a good thing because an hour later he turned glassy-eyed and his temperature shot up to 39.5 degrees. Haay, Trangkaso nga naman. On the third day, he was clearly better but I've decided to play it safe and avoid having his teacher call to say he is still sick. He missed four tests but it was only in Math that he had to make up for.

I realized that this could not have happened had we all been Bakunado . We should have taken the Vaxigrip, a flu vaccine offered to us last February. It may not have protected him all the way but it can lessen the severity of the illness.

And now here comes Swine flu! It's all over the news and the outbreak is scaring me like hell! Hubs and I have been monitoring the news since then and have done some research for prevention. I have read that the best defense is to strengthen the immune system - take vitamin C regularly, get enough sleep and get vaccinated. A flu vaccine can't really prevent Swine flu but it well help strengthen your immune system. I am sick of sick days and we are definitely getting vaccinated. If you think you need it too, make a click stop at http://www.bakuna.ph for more info.

Gorgeous MUM said…
hope your little one gets better soon! you can't help but be paranoid with getting sick, from all these swine full pandemic going on!

Unknown said…
My thoughts are with you and your little one. Lots of rest, plenty of fluids, and TLC.