July 26, 2011
My boys love going to car shows.  Yesterday, we went to a car show featuring a lot of sports cars and the cars used from the movie Transformers.  When I heard Bumblebee was there, I went with the boys.  I'm not really into cars but I was excited because of the featured Transformer cars.

As soon as we entered the exhibit hall I saw so many different automotive flags bearing the names and logos of Porsche, Ferrari, Lamborghini, Mercedes Benz.  Those were the only names I'm familiar with but there were a lot more custom flags; I heard from hubs that some are Korean and Japanese cars.  The whole exhibit hall looked very festive with the colorful pennant strings scattered around the area. 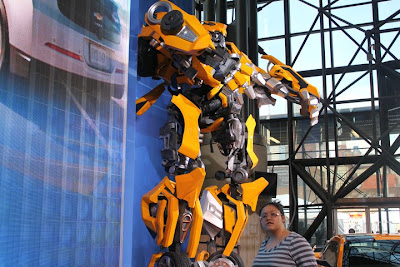 I was surprised to see a customized Facebook Porsche. It was so cool!  But it was on the Transformer collection that my eyes feasted. While I was busy taking photos of Bumblebee, Optimus Prime and Dino; my boys were excitedly taking all the giveaways and souvenirs handed to them by the car manufacturers.

We were all too tired from going around and taking photos so I thought my boys would head to bed early when we arrived home.  But I was wrong, hubs and son stayed up late looking at their photos and sorting their souvenirs and giveaways.  Nothing can compete with men when it comes to cars.
advertising custom flags